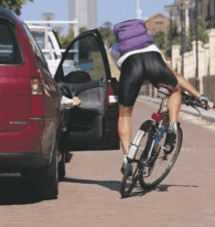 {1:30 minutes to read} Every year more than 15,000 people walking and biking are injured by drivers on New York City streets.

We typically associate crashes with moving vehicles, but “dooring” can be equally dangerous. In New York City and New York State, opening a vehicle door into moving traffic is a violation of the Vehicle and Traffic Law.

Unfortunately, even in serious crashes, victims don’t have the presence of mind or are too shaken up to get the motorist’s name and other critical information. Often times, victims’ injuries are masked by adrenaline, and they ride away only to realize later that they are really hurt.

Transportation Alternatives, an advocacy group for pedestrians and bicyclists, publishes a checklist to follow in the event you are doored.

When the police arrive
1. Request an accident report
2. Request the officer issue the motorist a summons for dooring
3. Get reporting officer’s name, badge number and precinct
4. If you even suspect you’re hurt, go to the hospital

After the crash
1. Photograph your injuries
2. Call a lawyer

Langsam Law recently settled a case for a client who incurred a broken shoulder when a driver opened the door into traffic, knocking him off his bike and into the roadway. The settlement provided compensation for the his pain and suffering and permanent injuries.